A few pictures of a sportive that we took part in as part of our preparation for the long weekend in the Alps coming June.

The route started in the northern part of Belgium and descended through to the southern hills or ‘bergs’ of the Ardennes that are notorious among many cyclists and often talked about with both reverence and terror in one breath. A few of those really steep and long climbs were included in the parcours, including the famous ‘La Redoute’ with it’s average gradient of 8,5% and ramps of 20% over the course of 2 kilometers. Real ‘calf (the leg muscle) biters’ as we call them in Dutch.. 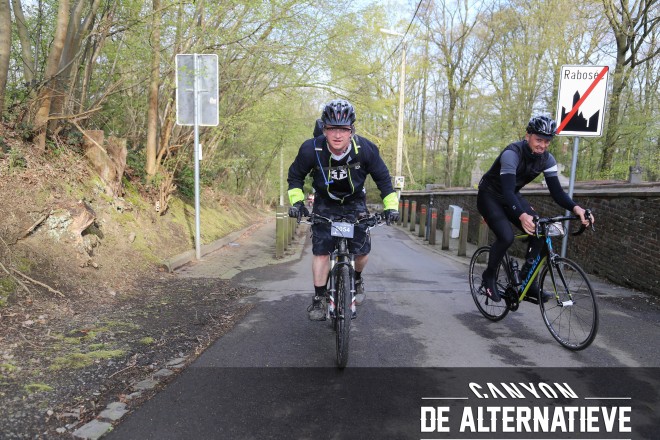 The weather was not in our favour. It was cold, pretty windy and along the 200 km route we were thoroughly soaked with a few icy showers. Brrrrr… However, once you’re out and about and cruising through the stunning landscapes of the northern Ardennes you realise pretty quickly that there is nothing quite like it.. It’s glorious, blissful freedom and adventure and the sense of achievement makes everything worthwhile.

All in all, a very nice day and a great way of kicking of a romance with that area which will see me return many more times to further enjoy the countryside, the Belgians passion for cycling and not in the least the tasty Belgian beer on offer after a hard day out!

Below is the route we took. Originally 160km, but we got lost and had to trace our route back making it into nearly 200 km in total.

Next up Klimclassic at ascension day  (May 5).